Last week we got the chance of a lifetime. A phone call came in from our good friend, Brock, and he offered us a set of 2 premium tickets for the Star Wars in Concert happening at the Save Mart Center. I thought he was joking. I really did. He is a super Star Wars fanatic - he has the official clone trooper costume to prove it. He finally convinced me that the offer was for real and I couldn't have been more excited. Our family went through a Star Wars phase a few years ago (we purchased all of the movies, wore clone trooper costumes for Halloween, played LEGO Star Wars on Wii and XBOX for days at a time, we were ecstatic to see the all new Star Wars Clone Wars movie and animated TV series come to life, stood in line at Disneyland too many times to ride Star Tours just so we could get another glimpse of C-3PO and R2-D2, and bought every last one of those Star Wars Galactic Heroes action figure toys.) We were INTO IT! Even though we are past that phase of life those characters will remain our lifelong friends.

We were/are beyond grateful for the generous gift of these 2 tickets. But that posed a dilemma for us. Jeremy and I both wanted to see the show, but how could we go and not take out 2 boys whose lives revolved around Star Wars for so many years? Jeremy headed down to the box office and purchased 2 more tickets. 2 $25 seats. Yes, they were in the VERY BACK ROW, at the TOP of the highest balcony, where their heads touched the back wall. Nosebleeds. You got it.

Here we are before the show is about to start - can you feel the excitement?! Trevor wore his Rebel Alliance hat in place of his wookie costume. 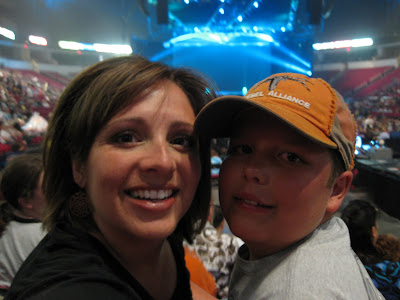 The show began and it was quite the overpowering emotional experience! Check out that 100+ piece orchestra! The first few notes of the Star Wars main theme began and it was indescribable. (FYI: it's the French horns that play that main theme - we learned that by watching the musicians do their thang.) The live music was so impressive as the movie frames of all our character friends flashed across the giant screen. The combination of "seeing old friends" and being overpowered by the awesome talent of the orchestra brought tears to my eyes. 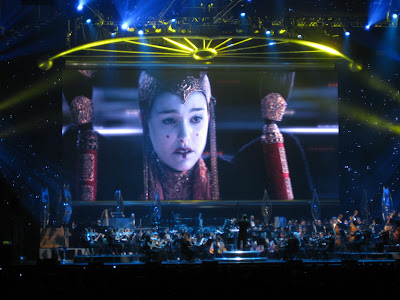 Even seeing the bad guys (Vader and Darth Maul) generated tears. The Imperial March (Darth Vader's Theme) felt so good to my ears! 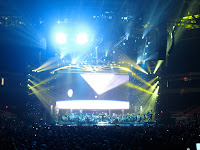 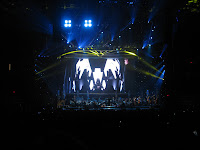 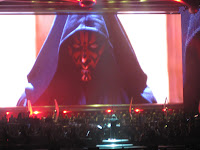 Maybe it was a combination of being exhausted after a long week of working Cub Scout Day Camp and studying the music of John Williams all week, or maybe because I've been a lover of music my entire life, whatever the case, I was quite teary this evening.

Our narrator for the evening's performance was the actual Anthony Daniels. (He's the guy who played C-3PO in the original trilogy.) He was there on stage (no recorded voice over business) in person! He was so entertaining! He walked us through all 6 films, did a fun bit on the importance of his character, and brought so much life to the evening. We were thoroughly impressed by him and his excellent acting skills this evening.
During intermission and after the show we were all giddy school-children out in the main halls. There was a great display of characters' costumes, weapons, backgrounds, and my favorite - written music by John Williams himself! Trevor and Logan were next in line to get a picture with Boba Fett and Clone Trooper, but they were called away just as the boys began to take their places. Here's the best shot of the boys with the cool costumed guys. 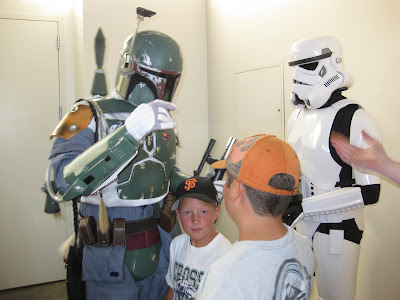 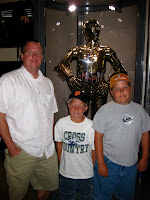 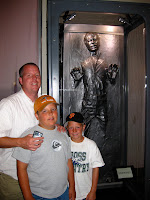 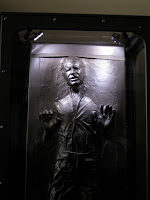 Ah yes, here's the best part of the displays: THE MUSIC!! Look closely now... that is John Williams ACTUAL HANDWRITING! Look up in the upper right hand corner. Can you see his name written up there? Yeah, he wrote this stuff! 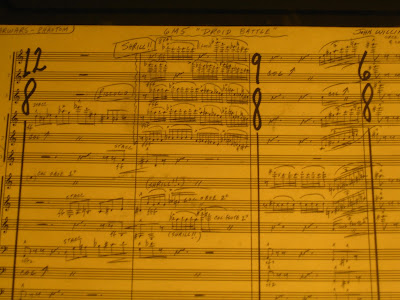 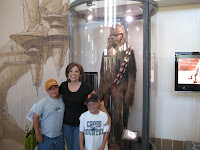 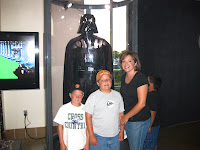 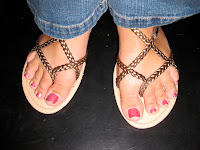 These were the cool backgrounds hung around the outer hallways. Trevor and Logan would portray some excellent Ewoks, eh? 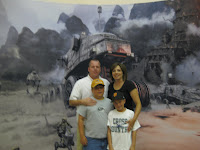 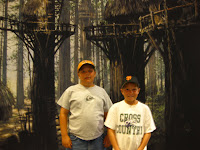 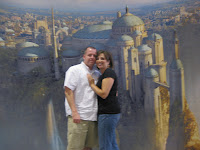 We had a blast at this concert. It was fortunate that this concert was the first for Trevor and Logan. They had a great experience and look forward to many more live music events in the future. One last shout out to Brock (and Erin!) for the tickets - THANK YOU! This concert will be a highlight of our 2010 summer adventures.
Posted by jennifer at 5:56 PM

I'm glad I wasn't the only one tearing up at the concert. It was SO beautiful! And there was something entertaining for everyone. Can you imagine that orchestra coming back and playing more of John Williams' scores, like for instance, HARRY POTTER?!?!

Wow! You are so lucky to have been able to go! We wanted to go! How awesome for you guys! :)