We have been talking about getting Lizzie's ears pierced for awhile now. She wanted to have an "Ear Piercing 6th Birthday Party" back in January where all of her little girlfriends would go to the shop and get their ears done! We quickly nixed that plan, but continued to talk about when would be a good time to get her ears pierced.

I always said that I'd love for her to wear earrings - I would've loved her to have had them when she was a baby (Call it my culture coming out in me; babies with earrings are sooo cute!), but I knew it was smart to wait until she was old enough to 1. want them for herself and 2. be old enough to care for her ears on her own.

Jeremy and I never really discussed this ear piercing scenario for our daughter. We never decided on an age or event that would define the time when we were ok with her getting her ears pierced. This lack of planning caused some family friction for awhile. Lizzie mentioned wanting to get her ears pierced. Mommy was excited that she was finally aware and excited about it. Daddy was not so sure he wanted his little girl growing up faster than he was ready. After much persuading (from Mommy) and pleading (from Lizzie) and another outside influence (the cousins next door getting their ears done the week before) Daddy finally gave the gave in.

Maddy and Emma (who got their ears pierced the week before) were willing and excited to come with Lizzie to Claire's and help her through this memorable life-moment. Lizzie was prepared for the pain (thank you to Emma and Maddy for detailing their experiences several times over); the pain factor is what held her back initially, but after the convincing of the cousins Lizzie finally decided it would be worth it and that it really wouldn't be that bad.

She took her time choosing the perfect pair of earrings that would be cute and match everything she wore for those first 8 weeks - perfect "diamonds" set in a gold plated post. It's all about fashion these days, people.

The lady in the store was helpful and accommodating. She suggested we have both ears done at the same time so the pinching sensation would only happen once. She gave Lizzie the "Claire Bear" to hold onto while they did the piercing. The lady took her time choosing the correct placement. Can you see her calm face masking her racing heart!? 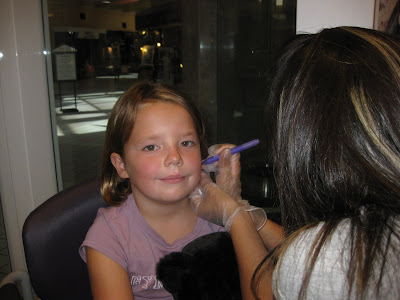 Set?
Maddy and Emma each held one of her hands for moral support... 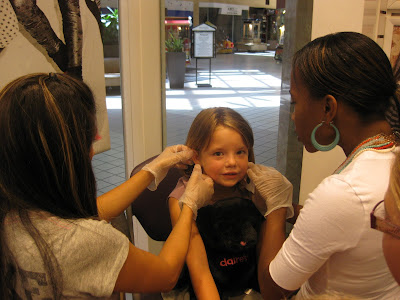 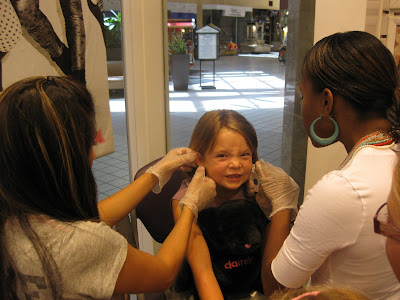 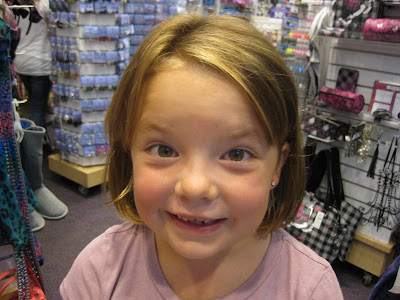 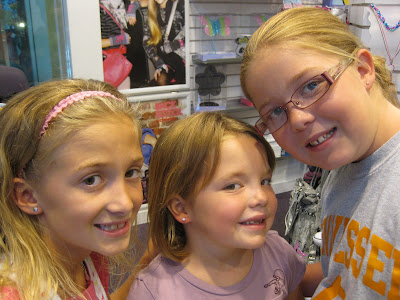 It was a big day for mama and daughter. I was so happy that she was so brave. She didn't shed one tear! Lizzie really is one tough girl. At the same time there was a pang of sadness. This was the only time my girl would get her ears pierced. I've waited my whole motherhood for this moment and now it's come and gone. I just didn't quite prepare myself for Lizzie to have a "coming-of-age" experience when she was just 6 years old. Anticipation is a tricky tricky thing. My baby girl is no longer a baby. She's a big girl now!

Of course, the happiness outweighs any sad feelings. We are all happy she's got her new earrings. She looks and feels like a princess. And her ears are healing nicely. There is no more soreness or redness. She remembers to clean her ears every day without a reminder from mom and she does it all on her own - exactly how we wanted it to be.

Next comes the which-earrings-are-appropriate-for-little-girls battle. Any pointers or advice from you experienced mothers?
Posted by jennifer at 8:00 PM 2 comments 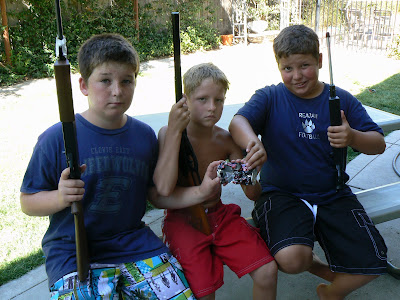 Don't let those serious faces fool you, they are quite ecstatic to be out there shooting guns to their hearts' content.

At any time of any day these boys could be found in the backyard firing away at random objects found around the home. Note the pulverized soda can they are holding. Cereal boxes, milk cartons, stuffed animals no longer treasured - all became targets.

This BB gun fetish brought some unique backyard challenges. No longer can you walk barefoot unless you are willing to step on those teeny tiny bb's. Those things are everywhere! Ever done that? Well, you won't want to do it again if you have. And, depending on which door you exited, you'd be forced to yell, "CEASE FIRE!" to protect yourself from being hit by a stray bb.

The bb gun fascination will continue for awhile longer. But, like everything else the kids are excited about, will come to an end shortly. Trevor has BB Gun at the top of his birthday wish list. We'll see how long it stays in the #1 position as his late September birthday gets closer and closer. For now we will hear, "ting! ting...ting! ting, ting! ting..." through the afternoons and into the evenings until the daylight is gone.
Posted by jennifer at 9:22 PM 0 comments

Trevor's the old man on campus in 6th grade!
Logan's stoked to be an upper-grader in 4th grade!
Lizzie cannot contain her enthusiasm for 1st grade!
Who would've thought it would be so exciting to eat lunch in the cafeteria? 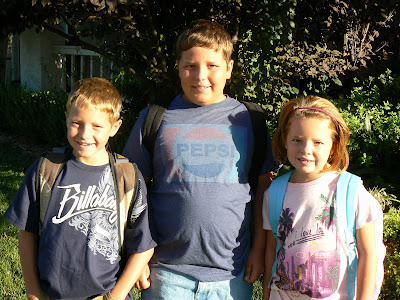 The first day of school began quickly. The kids were up earlier than usual - giddy, excited, and nervous for the day they'd been anticipating since 3 days ago. (Reality never sets in for these kids until it is nearly upon them.) They dressed quickly and got their shoes and socks on in record time. And what beautiful NEW shoes they were! 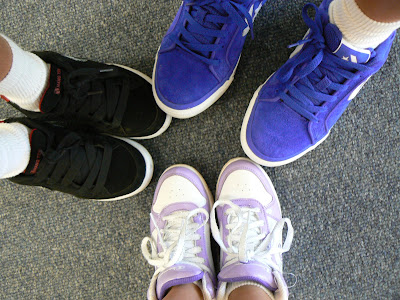 Jeremy made a delicious first day of school German Pancake breakfast then hopped in the shower while they baked.

Then the smoke alarm went off.

Mass chaos ensued while mama tried to persuade the smoke coming from the oven to go outside.

Jeremy's yelling from upstairs, "WHAT'S GOING ON DOWN THERE!?"
[the smoke alarm continues to screech]
The kids are all yelling simultaneously in response:
"THE OVEN'S BURNING!"
"DAD, IT'S OK!"
"IT'S JUST SMOKE!"

Jeremy yells again because he can't hear a dang thing they're saying, "DO YOU NEED HELP?!?!"
The kids yell back again trying to outdo the volume of the ear piercing smoke alarms:
"THE OVEN'S BURNING!"
"DAD, IT'S OK!"
"IT'S JUST SMOKE!"

Jeremy yells again, "DO YOU NEED HELP?!?!"
The kids finally get that he can't understand when they're all answering him at the same time. They all yell at him in unison, "NO!"

Just then the alarms quit. *Sigh of relief.*

The volume of those smoke alarm were... well... alarming! Oh, the ringing in our ears! No worries, it was only some butter burning off the bottom of the oven that spilled over the side of the pan that caused all that commotion.

The yummy pancakes were eaten in record time. And then lunches were packed while the kids ran outside to take some back to school photos with dad. 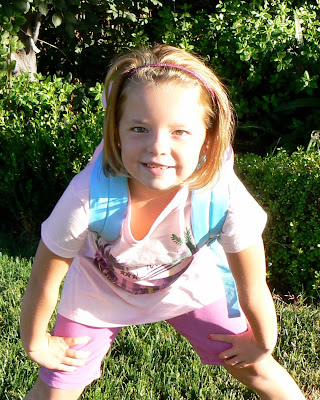 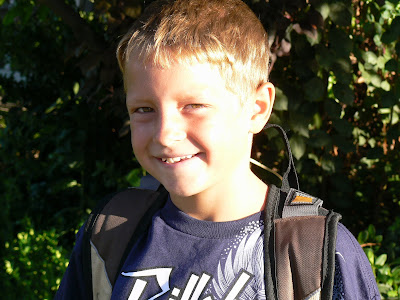 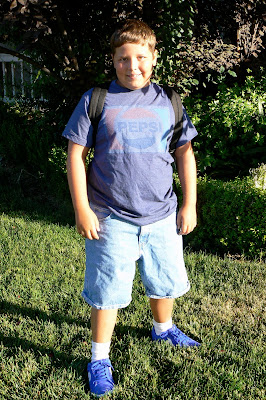 We ran out the door (without the carefully prepared lunches! Ah! Completely forgot to pack the lunches INTO the backpacks!) and drove over to the school for the traditional first day of school "parent drop off". There we met up with some of the kids' good buddies and took some more embarrassing pictures before saying our final goodbyes. 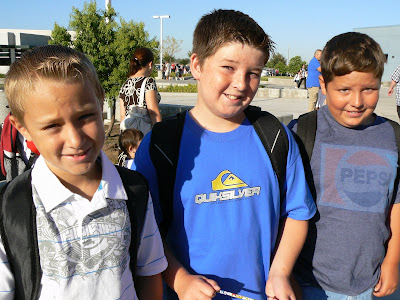 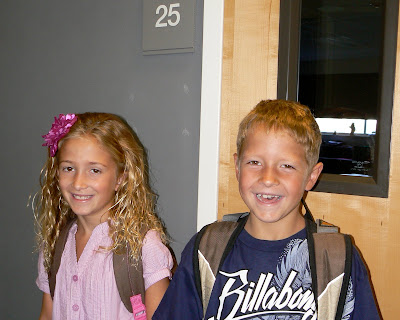 All in all it was a great start to the 2010-2011 school year. (- besides that smoke alarm business and forgetting of the lunches.) We can't wait to see what this year has in store for us!
Posted by jennifer at 9:11 PM 2 comments 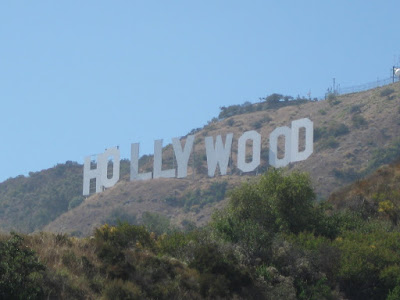 We had a short sweet visit with Jeremy's sister Kristen and her family this weekend. It was a jam packed 24 hours we spent together full of lots of good times, good eats, and good memories. She has been wanting to take us on the hike up to see the HOLLLYWOOD sign and this visit was the perfect opportunity.
We watched the new Percy Jackson movie The Lightning Thief for several hours of our trip down to San Diego, back to LA, and then home. There is one scene in this movie that intrigued the kids the most. In the movie Percy and his gang must go to the underworld to talk to Hades and rescue Percy's mom. The entrance to the underworld is through the HOLLYWOOD sign. The scene in the movie shows Percy and his buddies entering a magical doorway in the letter "H". Trevor was especially thrilled to see this "entrance" to verify the reality of his new favorite movie. So, to say that Trevor was excited to take this hike is definitely an understatement. His energy and excitement were contagious as he helped the DVD player in the car play and replay the HOLLYWOOD sign scene over and over and over.

We began at the bottom of the hill. The beginning. A very good place to start. 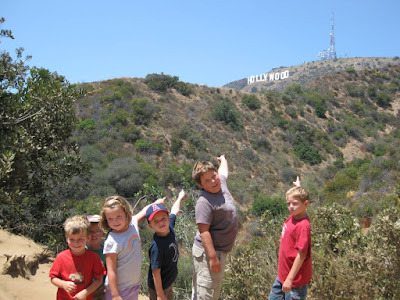 The smaller children got to be carried for part of the journey. 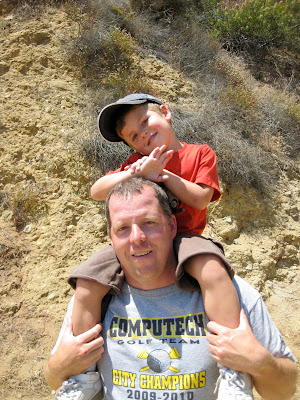 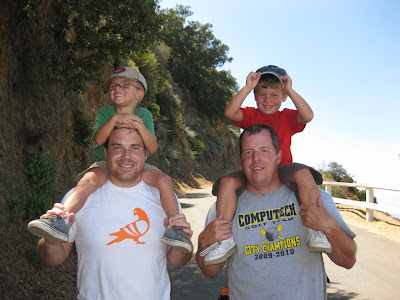 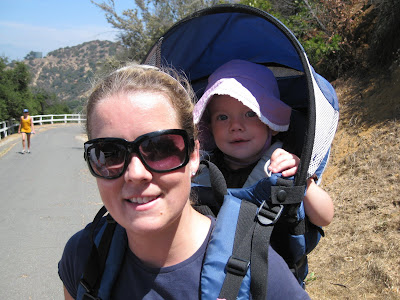 We saw some wildlife on the way up and back. 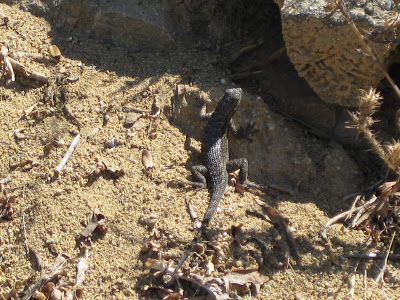 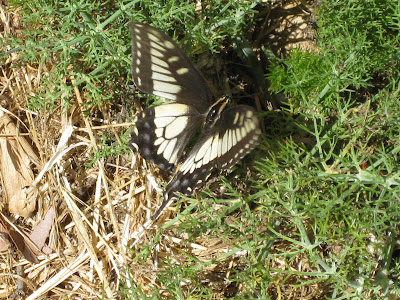 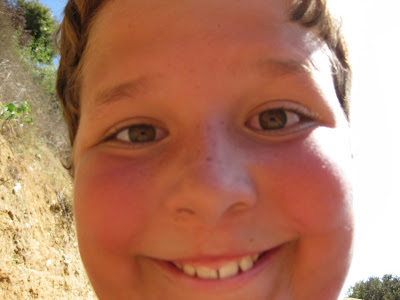 After about an hour of hiking we made it to the top! You don't actually get to touch the sign because it's fenced off due to vandalism. You hike up to the backside of the letters. Check out this view from the top. Read from right to left - you can see the back of the H,O,L,L, and Y. 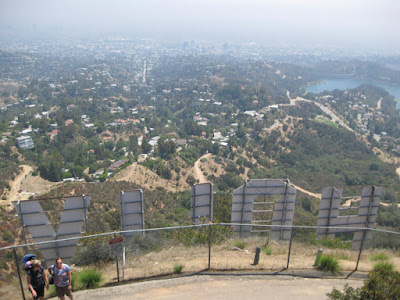 And check out this lovely view of the LA skyline. Mmmmm. Smog. It was worse than usual today because of a local fire - normally the smog wouldn't be this bad. 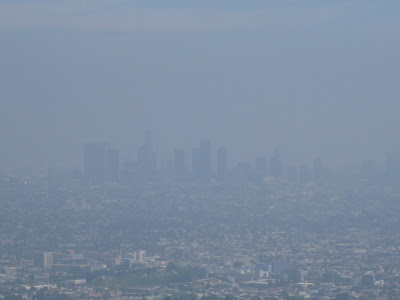 Family Pictures at the top of the hill 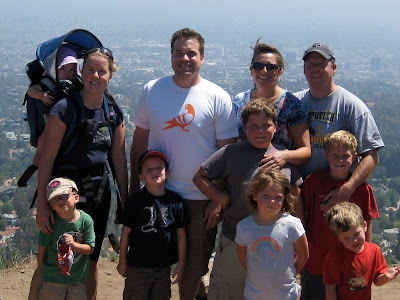 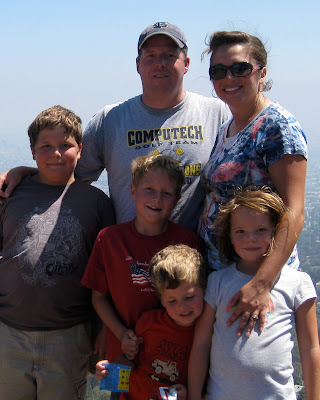 The children were proud of themselves for making the hike all the way up to the sign. They were not disappointed to find out that there wasn't really an entrance to the underworld at the base of the sign. (Although, they did a thorough search for it when we got there.) The kids are already enjoying telling everyone about their hike to the HOLLYWOOD sign.

It was a fun active way to spend the afternoon. Thanks to our great hosts and excellent LA traffic navigators, Kristen and Doug, for taking us on an adventure of a lifetime. 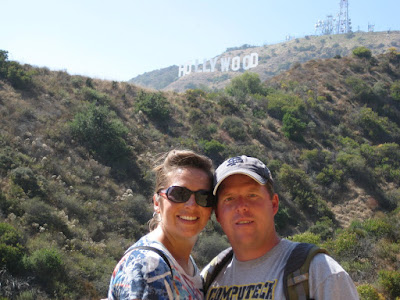