Today was a beautiful day! It has been cloudy and drizzley since we got here, but today there was no rain and the sun came out! Just look at those blue skies with fluffy rolling white clouds - gorgeous!
We got to go to the Capitol for a VIP tour by one of Barbara Boxer's interns. Here we are on our way to the security check. Security checks are EVERYWHERE! 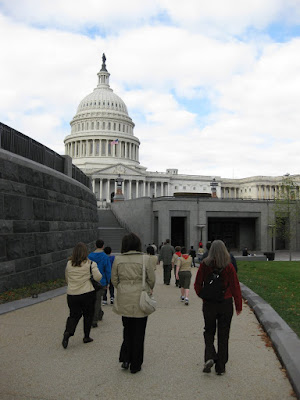 We made it through the security check! Whew! 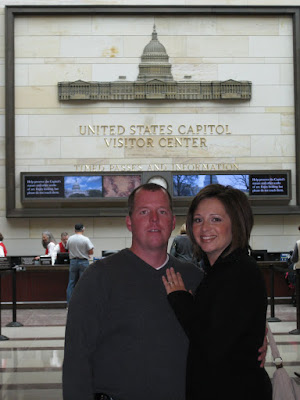 The big dome that sits on top of the Capitol Building weighs 9 MILLION pounds! Holy cow! It is very impressive and huge. Like daddy says on the video, it's so tall inside this dome that the Statue of Liberty could stand inside it. This view is looking up inside - it's my favorite! I love that painting of George Washington. 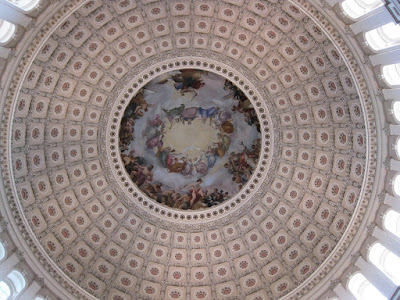 This is a close up of the painting that's on the ceiling. George Washington is in the middle with Lady Freedom playing the trumpet and Lady Liberty on the other side. 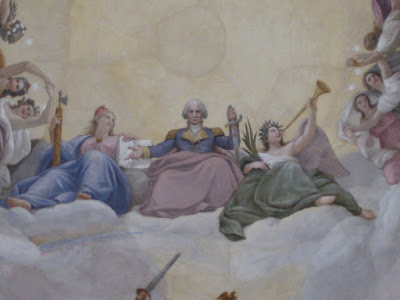 This statue is especially for Uncle Robb. Guess who that is?! Yep, it's Ronald Reagan. It's the newest statue given to the Capitol by California. We have lots of things named after him in our town where we live! 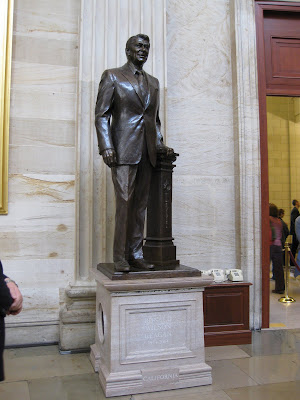 Here's a close up of the base of Reagan's statue. Can you see the little pieces of gray rock that go all the way around? Those are real fragments of the Berlin wall that came down while Reagan was our president. It was Reagan that said, "Tear down that wall!" The wall fragments were such a neat touch. But do not touch it - like I did - you're not supposed to touch the statues. Woops! (Did you see that part in the video where I got in trouble? Watch it again - daddy was so proud to get mommy on film as she did something naughty!) 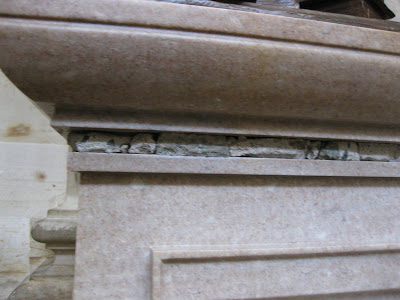 Here's daddy doing his favorite thing - videotaping. Thank you to daddy for doing all of the filming on this trip! 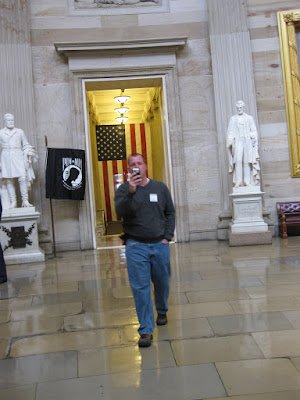 Wow. We really look like tourist in this picture - tour group sticker on the shirt and everything. 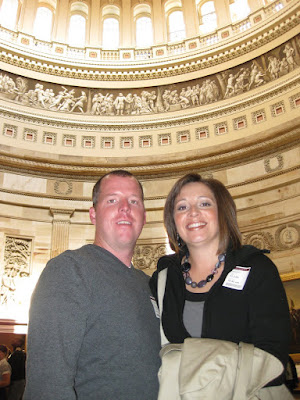 Across the street behind the Capitol is the Supreme Court. 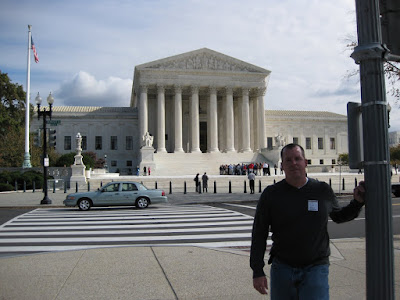 After our Capitol tour daddy had to go back to the hotel for a meeting. I got to hang out by myself for a few hours and check out things that I was hoping to see! I made my way over to the Smithsonian Gallery of Art. There are actually 2 buildings that hold art - one for the modern art and one for the more classic old art. I started in the modern art building, but didn't like what I saw. So I made my way over to the other gallery. The 2 buildings are connected by this underground tunnel and walkway. Even the tunnel is art! Check out the cool fiberoptic lights that make it look like you're traveling through time and space. It was so cool! 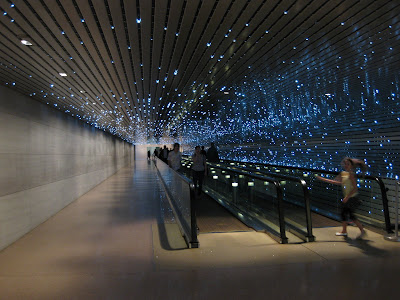 Ahhh..... that's much better. The classic art is so much easier for me to appreciate. See if you recognize any of these things I saw today...


Remember in the movie Night of the Museum 2 when they are in the different Smithsonians? These little guys sitting on top of this statue were in the movie! They flew around singing love songs! 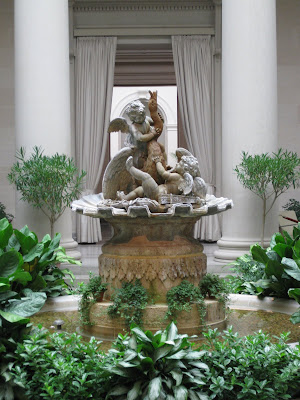 And this girl was in the Night of the Museum 2 also! She danced for a moment with Amelia Earhart. She's a famous ballerina statue done by Edgar Degas - a famous artist that lived long long ago. 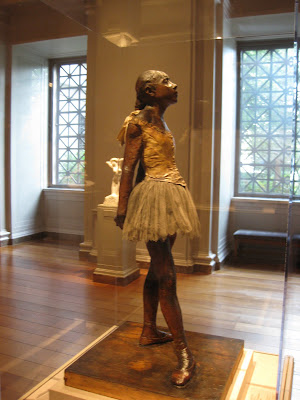 This part of the gallery was my favorite. I just loved all the impressionist paintings! They were the real thing too. Here's one by Monet: 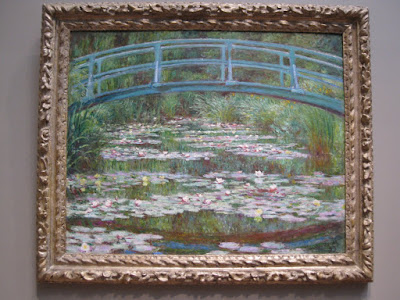 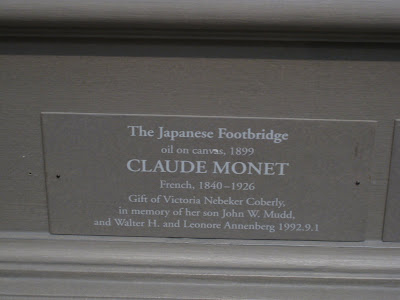 You can see his signature here on the bottom corner of his paintings. 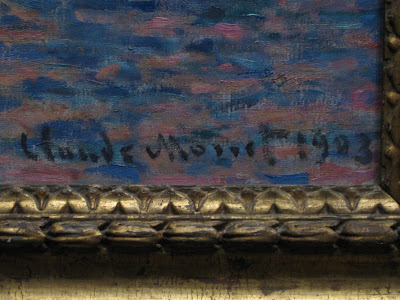 And here's a self portrait by Alexander Van Goh. (Remember our movie Baby Van Goat? Well, they made that movie all about colors and painting because of this guy right here - a famous artist!) 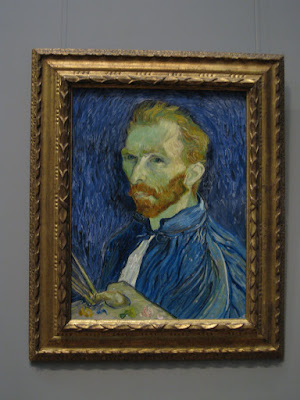 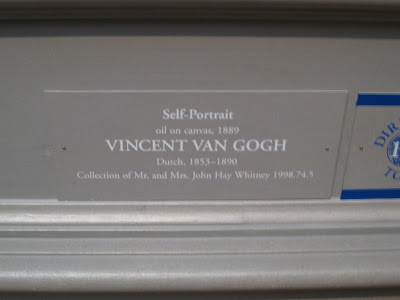 I got to sit in the room with all the paintings for awhile before heading back to the hotel to meet daddy. The art musem is really nice because they put couches in all the rooms so you can sit, relax, and enjoy your favorite art for as long as you want. I probably sat there for 30 minutes looking at all my favorites and learning more about the famous artists. It was so great! And daddy missed it all. Don't worry, he wasn't bummed about that at all.


Later this evening we got to go on an evening bus tour of the monuments in Washington D.C. It was difficult to take pictures at night, but you'll get the idea. Here are some of the highlights.

We began at the Thomas Jefferson Memorial. 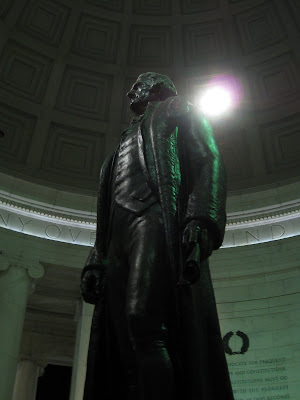 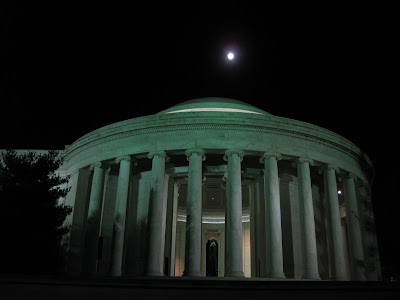 This picture turned out pretty cool. Can you see how the memorial is totally reflected in the pond below? 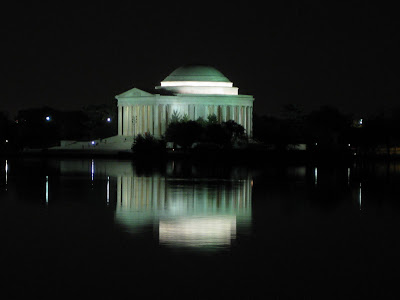 Next we visited the new FDR Memorial. We drove by a different FDR memorial earlier in the tour, but it was just a big rectangle of stone. When FDR was alive he requested that if a memorial was going to be built in his honor then he wanted it to be no bigger than his desk at the White House. So, they built that memorial just like they wanted. But the people wanted something more elaborate than that so they came up with this 4 part memorial.

Here's FDR (President Franklin Delano Roosevelt) the statue as he was most of his time in office - sitting in a wheelchair. 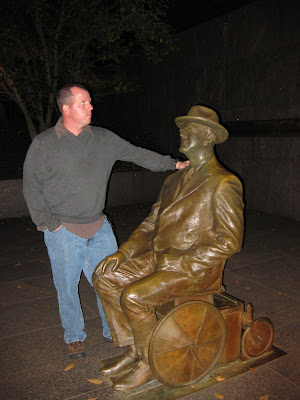 There are several fountains at this memorial - they were so beautiful at night! 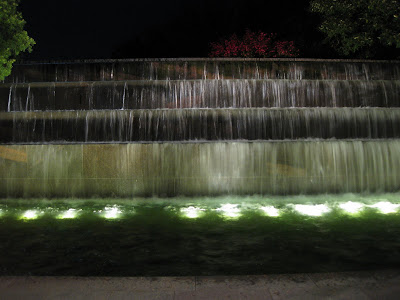 A picture of us in front of the fountain - with a flash... 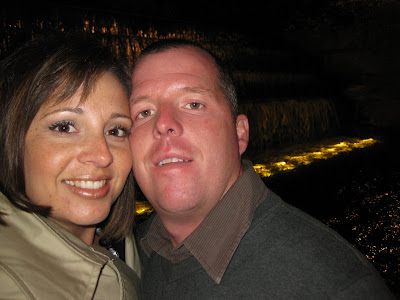 and without a flash.... ahhh... much better. Now you can see the background. 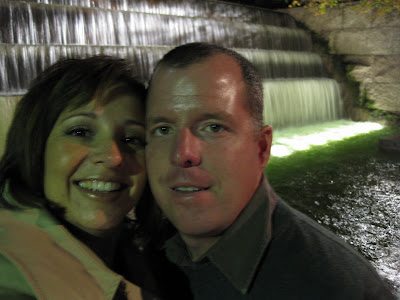 FDR served as president through the time of the Great Depression. These statues are of men lined up outside of a soup kitchen where they handed out food to people that were hungry. 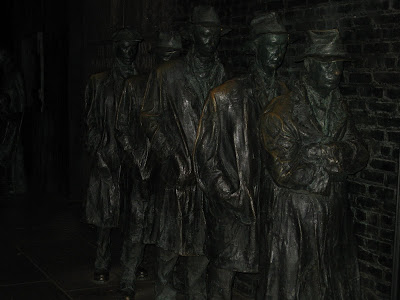 Next, we moved on to the Korean Memorial. This memorial is a series of 16 statues of the men that served in the army. They look like they're moving through the bushes towards the enemy. 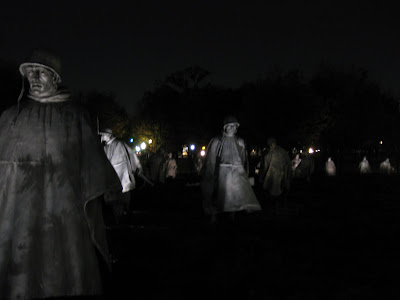 This statue is the last guy in the group. He's looking over his shoulder to make sure no one is behind following them or about to attack. 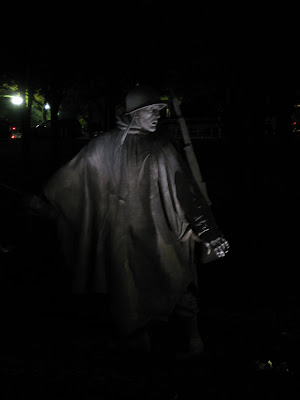 Next to the Korean Memorial is the most grand buidling of them all - the Lincoln Memorial. The building itself is HUGE! This was the place where Martin Luther King Jr. stood at the top of the memorial steps and gave his most famous speech "I Have A Dream".

Do you recognize this statue that stands as tall as our house? He was also in the movie Night of the Museum 2! In the movie he stood up out of his chair and walked all around. He's a pretty big guy to walk around anywhere! It was Amelia Earhart that made him sit back down in his chair as the bad guys came running through looking for them. It was pretty cool - we'll have to rent that movie as soon as it comes out so you can see all of these places again. 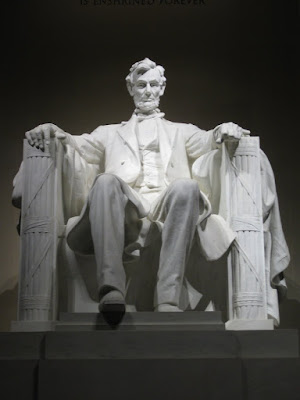 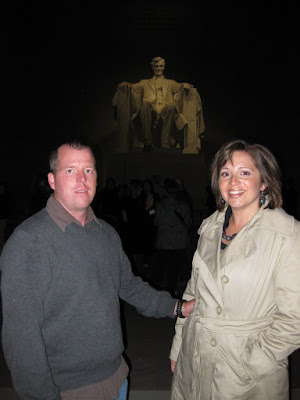 Daddy snapped one last picture of the Washington Monument looking out from the Lincoln Memorial. You can see the Capitol Building in the picture too. They look really close to each other, but really there is almost 3 miles between them. I love how it's reflected in the water here too. 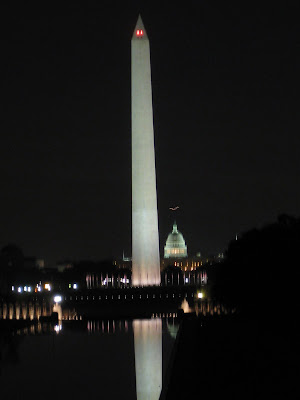 We were tired by the end of it. You can tell by the wear on our faces. It was 10 o'clock at night and we'd been driving for almost 3 hours. We were having fun, but were so ready to head back to the hotel for a good night's sleep.
Posted by jennifer at 1:36 PM

Jennifer and Jeremy, Thank you so much for giving such a detailed description of your trip! I know you are writing for your children, but I am enjoying it sooooo much! It is one of my dreams to visit all those places, and to see it through your eyes is so exciting! Hope you have a fabulous rest of your trip! (And a safe trip home!) :)

This was really fun to read...I realized how much I miss this place...oh, to have a non child trip like you guys, what fun! Enjoy!