Ahhhh... what a great way to start each morning.... hot cocoa, with SQUARE shaped marshmallows, on a beautiful bamboo tray.... what luxury! (It was free, thanks to daddy signing us up for the hotel's "Select Guest" program). 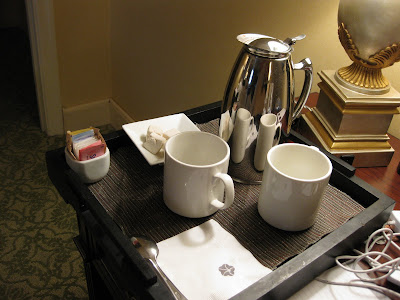 The hotel we stayed in was so refined - a four DIAMOND hotel - The Omni Shoreham Hotel in Washington D.C. It's an old hotel, but restored and well kept because of it's deep historical roots. Several inauguration balls were held here and many famous people came to perform and throw parties. This place is where Bill Clinton first shared his saxophone talent with the world!

Our last morning there began with our daily dose of hot chocolate while we packed up all our belongings before heading out for one last day of touring.

We began our tour at the Library of Congress. We both wanted to visit and were so impressed with this destination! There are actually several Library of Congress Buildings, but we went to the main, Thomas Jefferson Building that sits directly behind the Capitol. 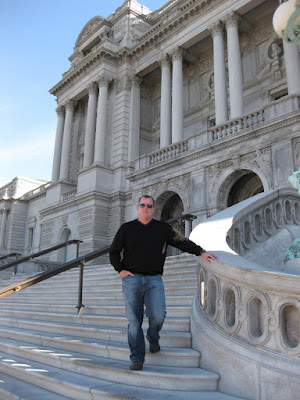 The main hall is so impressive. Check out the detail work in the ceilings! 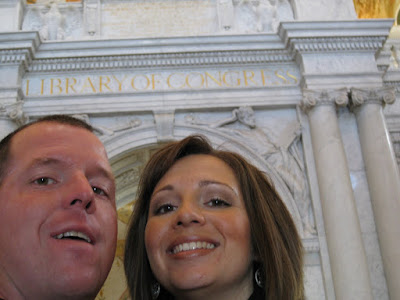 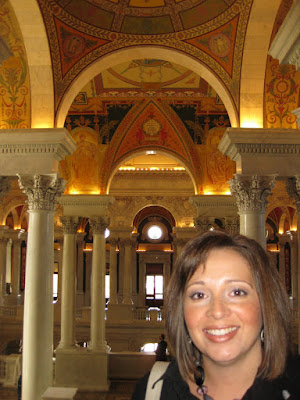 There was so much mosaic tile work - I was in heaven! 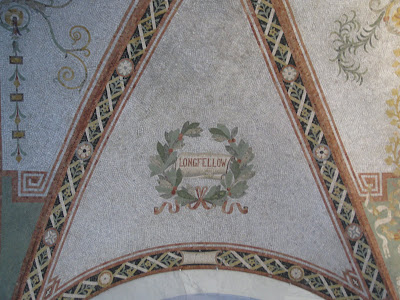 We made our way down the hall and came across this elegant room. Read the sign in this photo: 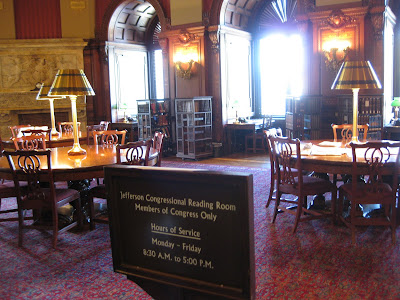 Yep, only Congressmen are allowed to read in this room!

We toured around the main floor and looked at all the exhibits. The coolest one was of Thomas Jefferson's personal library. Go HERE to see what it looks like because we weren't allowed to take any pictures in there. Every book was behind glass, but I so badly wanted to touch, read, and smell them! Of course we couldn't do that, but the Library did have a very cool interactive program set up for this particular exhibit. On the computer touch screen, you could select any book in that collection, and flip through digital pages of every single book! Wow. Now that was impressive.

Downstairs was a less elaborate exhibit about some Bob Hope pop culture. In there we found this little bit of info about Houdini the Magician. Kids, this one is for you! Remember how you were asking about Houdini and his famous tricks? Well, guess what? They never ever figured out how he did some of the things he did. They're still a secret! 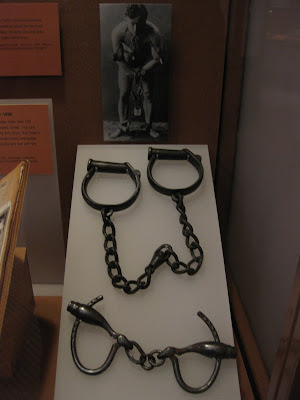 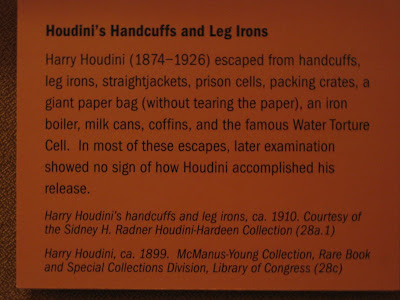 We so badly wanted to get into that Main Reading Room (you know, the one you see on all the movies - like National Treasure), but only library cardholders that were doing research were allowed in that room. So guess what we did?! We went and got our own Library of Congress Library Cards! It was quite an adventure. We had to maneuver the elevators, walk in an underground passageway to the next building, and go through a serious application process. In the end, we both ended up with our very own card with our individual pictures and everything! The card number is "good for life", but must be renewed every 2 years. After obtaining the cards we made our way back to the Jefferson building where that Main Reading Room lies, but couldn't bring ourselves to say we were "researching" something just so we could get into the room. We chickened out. Oh well, what a big bummer. But we did head to another exciting stop on our day tour...
The Capitol Building! One last time through the security (I got in trouble for having some airplane peanuts in my purse) and we headed over to the Gallery to see the House of Reps in action! 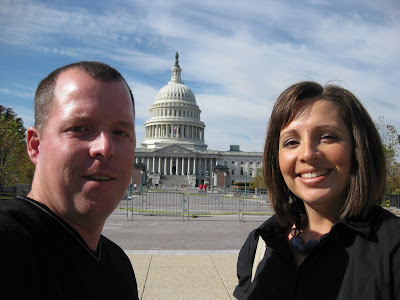 We were there while they were voting on the bill that would regulate credit card rules. I got in trouble again in here because I pulled out a map of the metro system while sitting in the Gallery. (That's 2 times in trouble today already.) That bill passed, by the way, and we got to watch as they talked all about it on the news tonight. We were there!!

We decided to hit 2 final museums in our last couple of hours. First, we made our way over to the Air and Space Museum. 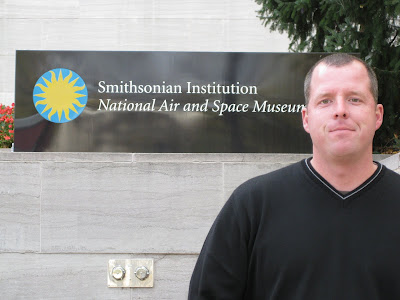 Those are real airplanes hanging from the ceiling! 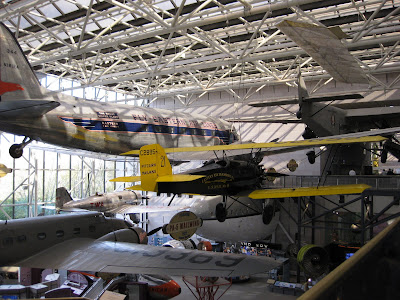 This aircraft was my favorite. It's a human powered airplane! 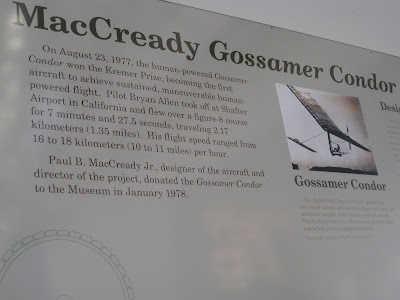 It totally looks like something Grandpa Doug could build out of saran wrap, balsa wood and a LOT of tape! 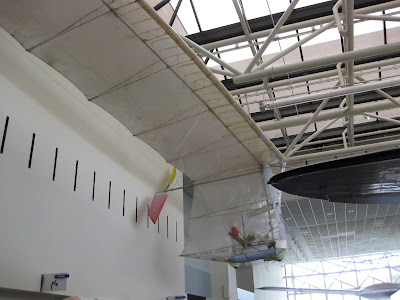 We only spent about 20 minutes in Air and Space before we headed over to Natural History. We're out front while daddy finishes up a phone call. 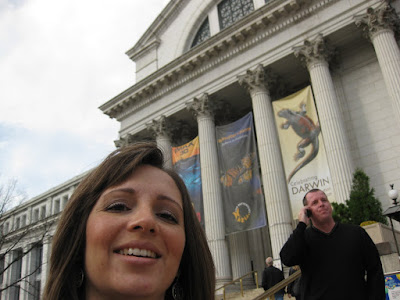 This great elephant greeted us as we entered the door. 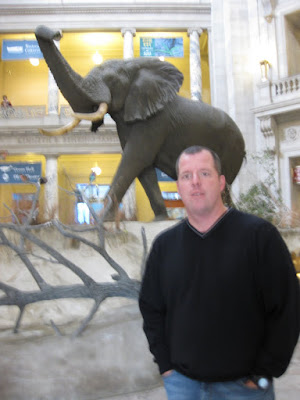 We both loved the water exhibit, but didn't take any pictures inside! The whole place felt like we were underwater because of the blue painted walls and rippling effect created by lights all around the room. There are some sea creatures suspended from the ceiling in this picture. 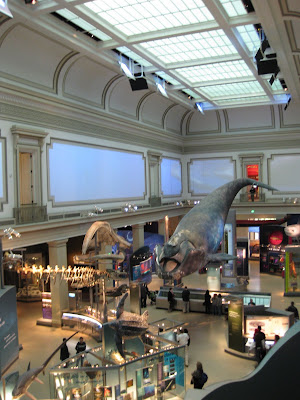 My FAVORITE part of this museum was the *bling*. Oh baby. This BABY was magnificent. The real Hope Diamond shown here, taken
out of it's necklace setting, is a mere 45.52 carat blue diamond stone. The necklace it usually resides in has another 45 white diamonds on the chain. 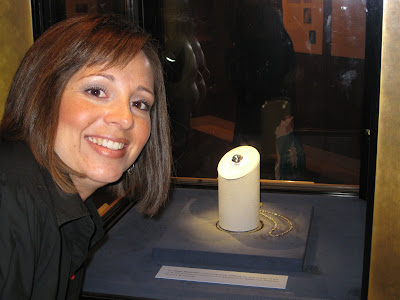 Right behind the Hope Diamond is another impressive rock - quartz! Logie man, this one is for you! (Logan loves himself a good piece of quartz.) 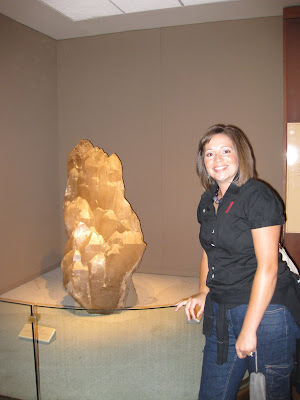 There were several "Night at the Museum" moments throughout several of the Smithsonian Museums. Here was the best one. This placard was right next to the giant T-Rex skeleton. 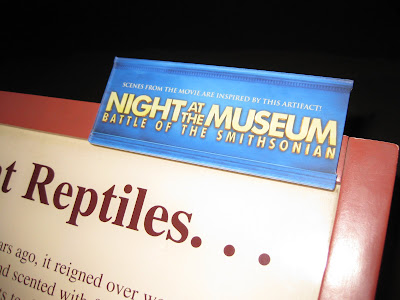 It was this particular skeleton that inspired the T-Rex character in the movie! How cool is that?! 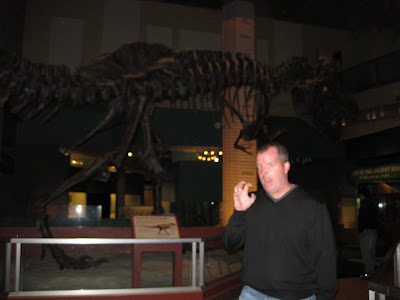 We finished off this museum in the mammal exhibit and took some fun photos of our favorite animals... 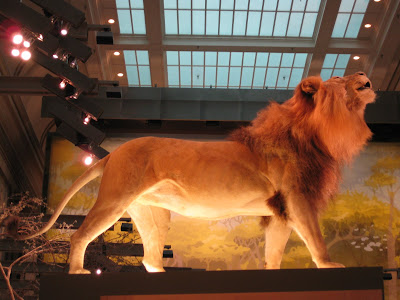 The eyes on this little fox guy reminded of me of an intense Logan face for some reason. 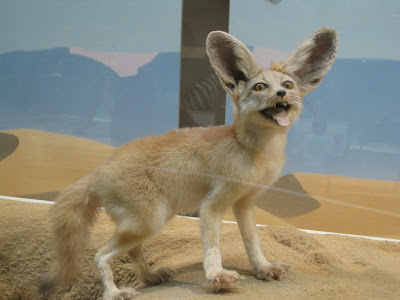 We took a picture out front and walked in through the front door and then right out the back just to say we'd been there. We had to cram in as much as we could on our last day! 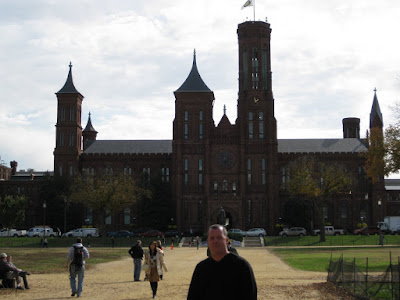 We finished up our touring and headed back to the hotel to pick up luggage, went for one last metro ride, and checked in at Reagan Airport. Our flight home was uneventful and we arrived home sooner than we expected. We were so ready to be home, see our kiddos, and sleep in our own beds. We had a great time spending time by ourselves, but still felt that need to come home to normal life. It was a trip of a lifetime that we hope to repeat someday.
Posted by jennifer at 8:00 PM