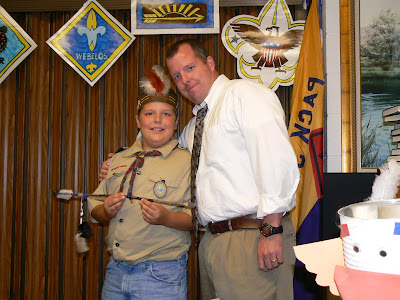 When Trevor turned 11 years old he entered a new phase of scouting. A special pack meeting was held to honor his accomplishments as a cub scout and celebrate his passage into 11-year old scouts. 11-year old scouts are no longer cub scouts. They are Boy Scouts.

Along with his arrow of light patch, Trevor was presented with an actual Arrow of Light, made by his dad. 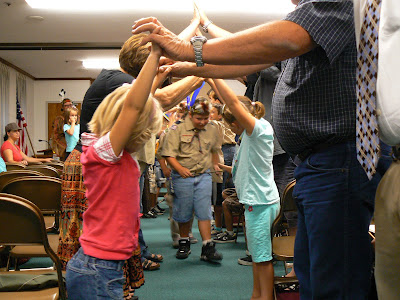 Trevor and his best buddy, Jacob, were both awarded on the same night. After they finished the Arrow of Light ceremony they made the symbolic journey through the tunnel to the new world of Boy Scouts. They were greeted by their new scout leaders on the other side. It was a special moment. A HUGE moment to be more specific. This award was the last one Trevor would receive as a cub scout!

This upcoming year will be full of "lasts and firsts" for our Trevor boy. He is growing up so quickly. We are excited to see him mature and grow, but wish we could hold on to those younger moments just a little bit longer. Since Trevor was a baby, people have been offering the advice, "Enjoy them while they're young. They grow so fast." It is only now that I am finally realizing the brutal truth in that statement that I heard over and over as a young mother.

For now, we will look forward to many more years of scouting in Boy Scouts! Trevor will learn and grow so much in the coming years. We are proud of him for making so many good choices and working so hard to earn this highest award in Cub Scouts.

Congratulations Trevor!!
Posted by jennifer at 6:43 AM