Trevor was not the only one excited to be at his first game. Lizzie had a BLAST at the football game and was so sad when it was time to go home. She wasn't the least bit interested in what was going on on the field. It was the cheerleaders in the stands that had her completely drawn in! When we arrived, we moved down the bleachers to our school's cheering section and sat down right behind the cheerleaders. The look on her face was priceless! It was as if she'd just received the best dream gift of her life! The jaw dropped. The eyes about popped out of their sockets. And she slowly sat down as if to gather herself back together. She had no idea this would be the best outing ever!

Check out her stance here: (she's the little girl on the left in white mimicking the ponytailed girls in front of her.) 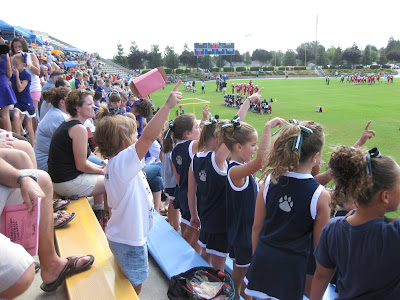 She was locked into this position the entire game, memorizing every move and every cheer. The girls thought she was the cutest thing and did their best to help her learn the words to the cheers.

Watch out world - we've got a cheerio on our hands! Thank heavens we have a few more years until she can officially join the spirit squad - which I understand is not an inexpensive sport. For now, she'll just have to fulfill her cheering dreams from the sidelines. Go Lizzie! Go!
Posted by jennifer at 6:00 AM

That is so hilarious! Lizzie is so adorable! And she will make the best cheerleader ever!

I can totally see her as a cheerleader! Just a few more years!