The Fall Sports Awards Assembly was Tuesday, November 9th. Logan was honored like no other! His name was mentioned at least 6 times throughout the presentation. He was the first Cross Country athlete to be given an award - and boy, was it a good one! He received MVP for his team. What an honor! His coach had so many nice things to say about our boy. She even pressured him to continue running next year. (We'll see what Logan decides to pursue next year - football or cross country? Both are equally pulling at him...)

Here's Logan with his MVP trophy. Wow! He was so thrilled!! The coaches made up these cool t-shirts for all the kids that were selected to go to District Championships. Logan was so excited about the shirt that he put it on right away. 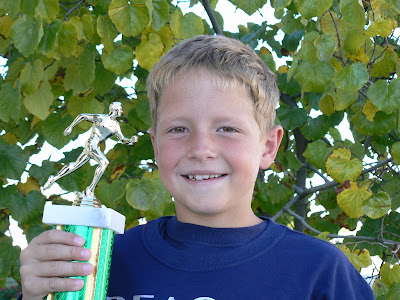 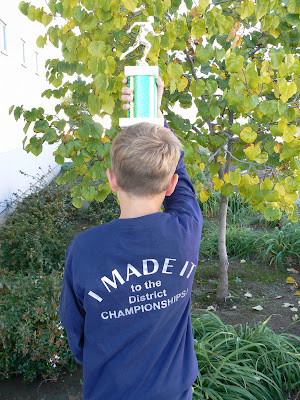 That is officially the end of the Fall Sports Season for Logan. He has begun his winter season wrestling practices and is enjoying learning something new. Soon, he will be out there in his fancy singlet taking down other kids on those wrestling mats.
Posted by jennifer at 6:00 AM