Last Saturday we took the kids out to the BMX bike park. Jackson had never been out to this park mostly because all the hills and bumps are much to big for him and his little 12 inch bike. After about 45 minutes we found some small bumps that he could handle. He took the first 3 really well - he LOVED the thrill of flying down the other side of the bump!! Hill #4 was slightly bigger than the previous 3 and he didn't make it all the way to the top. His bike rolled backwards, he fell to the ground, and slid back down the hill all twisted in his bike scraping up his hands on the way. He stood up wailing, crying, and blubbering on!! I tried to comfort him, but he just wouldn't have it. I kissed his scraped hands and tried to snuggle him to make it better. He was SO upset! Come to find out he wasn't crying about his hands or the pain. He was purely frustrated with the fact that he was to small! That he wasn't big enough to ride the bumps like the big boys!

During the last 20 minutes of our stay at the park, Jackson wanted to try the smaller speed bumps on the main course. Jeremy ran right behind him hanging onto his back the whole time to make sure he made it up and over every one. Jeremy ran behind him twice as he rode this course and Jackson was in dare-devil heaven! Finally! Something he could do!! Jackson was so confident that he attempted the bumps all on his own. He fell. But he did not fall hard nor did he cry. He came up laughing at his spill! He got right back up and started again.

He ended up riding those smaller speed bumps several times. And was even sure enough of himself to ride without a helmet. 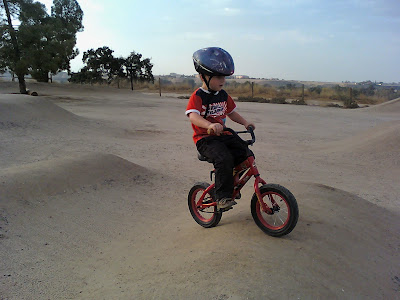 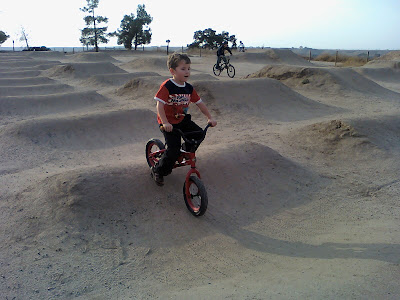 I know, I know. We are looking forward to some serious injuries in the future. He will be into anything and everything dangerous. He is ALL boy that is for sure. Nothing makes his daddy more proud than to see his boy enjoy the outdoor extreme sports.
Posted by jennifer at 8:08 AM