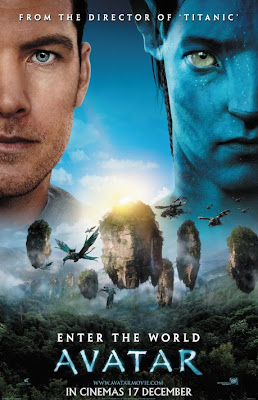 Jeremy and I took advantage of a free afternoon (thanks to Grandma Elizabeth) and headed out to the movies! Our destination - AVATAR.

We love big budget movies. We live for the thrill of entertainment - no matter if it's sci-fi, fantasy, action or comedy. And this movie did not disappoint.

We were drawn in from the very beginning. The idea of the Avatar - a remotely controlled body - was intriguing. The futuristic technology, new planet, and alien race was so fascinating. As we were introduced to this new population (the Na'vi) that lived on the new planet (Pandora) it was purely awesome and refreshing to learn about their culture and spiritual beliefs. The computer graphics and images added to this incredible introduction to the Na'vi.

It was an amazing show. It should have been for the most outrageous budget it took to create. We've debated about taking our 2 older boys - they would love the action, but it is long (162 mintues!), it is PG-13 for alien violence and some language, and it's slightly over their heads. We are still undecided on that. But you, you should definitely go. Go before Christmas Break is over. This is a must-see-on-the-big-screen show.


Official Avatar Movie
Posted by jennifer at 6:00 AM

I've heard really good things about it...phrases like, "best movie I've ever seen" have been thrown around on facebook. I really dislike sci-fi movies and so Joey will usually go see them with my dad and brothers. If he gives the thumbs up, we usually rent it when it comes out. : )

After your five stars, we had to give it a try. Jon and I both really enjoyed it. We humans sure looked puny and pasty compared to those other folk! Cool show.