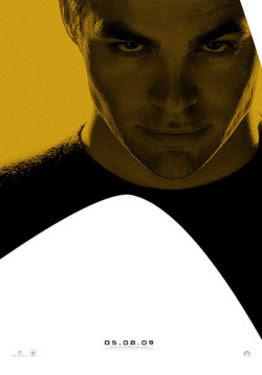 So I suppose you can call us "trekkies", but not "trekkers". From what I've been reading "trekkies WATCH Star Trek" and "trekkers LIVE Star Trek" (as in...they have Star Trek themed weddings, go to Star Trek conventions dressed in costume, and name their children and pets after characters). We are not die hard trekkies either. Jeremy watched the original Star Trek with Captain Kirk when he was younger. And I watched Star Trek the Next Generation with Captain Picard when I was growing up - my whole family did. We loved that show! Basically, the point of this whole history is, we both have a general knowledge of Star Trek and it's characters.

The reviews came out about this movie and they all ranted and raved about how awesomely wonderful fantastic it was and we decided that we needed to see it too. Last weekend we went out for date night with our Costco movie tickets and saw this new Star Trek movie.

It was great from the start. Actually it was great even before the start - those previews were so much fun! We can't wait for Transformers 2! Beware of that first opening scene. I was almost bawling in my seat - I was so drawn in even in those first few moments! We both enjoyed the whole thing. The back story on all the characters was so enjoyable to watch unfold. They dynamics between all those characters were interesting and comical. I especially enjoyed watching Kirk and Spock interact at their first few meetings - you'll like it too - I know it! The special effects and computer generated images were all fabulous as well...blah blah blah on all that technical stuff - we just like the action, comedy and entertainment factor.

My favorite character was Spock. Maybe it's because we've watched that guy (what's his name?) on the TV shows Heroes and then 24. He did an excellent job in this role. Leonard Nimoy made his appearance in the movie also - I wasn't expecting that, so hopefully I didn't just spoil that surprise for you. It was neat to see him side by side with the new Spock (his name is Zachary Quinto - just looked it up). Although there was no sign of William Shatner anywhere. I read in some magazine that he didn't even get an invite to appear in this movie. That seemed strange. But no matter, that's neither here nor there. There also seemed to be several actors from the TV show Felicity that showed up in this movie (sorry no Keri Russell for you Keri Russell fans out there...). That's probably due to the fact that the director of Star Trek, J.J. Abrams, also directed Felicity. Anyway, enough of those ramblings...

We recommend this movie to trekkies, trekkers, and those that enjoy a little sci-fi adventure. I don't think we'd take our 7 and 9 year old kids though, still too old for them. It is PG-13 after all.

What did you think? Was it as good as they said it would be?
Posted by jennifer at 2:16 PM

I LOVED IT!! My Dad and I had a daddy daughter date on Monday and went to this movie. From the very beginning it was awesome! I loved how if you had watched the show you could pick up on lots of little things but even if you never saw Star Trek it would still be a very good movie.