Jackson started gymnastics last week. I was lucky to find out that there was a class for his age group that meets at the same time as Lizzie's. So now they both get to go to gymnastics during the same hour each week!

Jackson's teacher is a patient patient woman. I don't know if she has any kids herself, but she knows how to work these 3-year-olds and MAKE THEM do what they are supposed to do. Jackson has been overly excited his first 2 sessions and she has to remind him at least 25 times during the 45 minute class to "sit down Jackson" or "it's not your turn Jackson" or "come back here Jackson". His line is, "Jackson's turn" repeated over and over and over until his teacher acknowledges him and tells him he has to wait until the other kids are done.

Here he is with his cute teacher. And the other picture is of him sitting on his butterfly mat, not so patiently waiting for "Jackson's turn!" 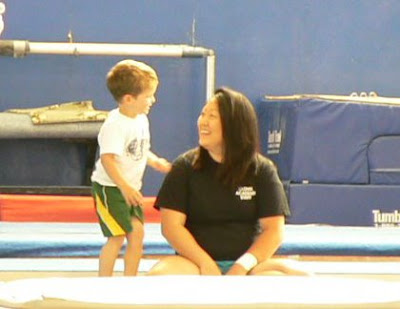 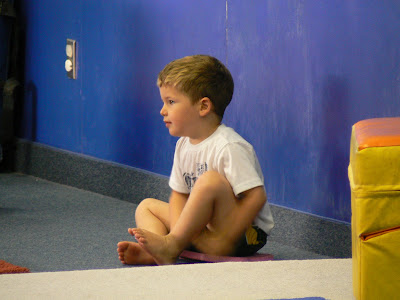 The first video is 59 seconds long and the second video is only 6 seconds. (I think his teacher likes being able to throw him around a little.) They do a miniature version of the vault in this class. It's so cute!


He loves having his own activity and his own teacher. So, who knows how long we'll stick with this gymnastics plan for ol' Jackson, but for the meantime it works for all of us.
Posted by jennifer at 12:00 PM

Ive been thinking of putting Will in Gymnastics, cuz Kate is going to start and we get a discount if he does it too! How old is Jackson? Will will be 4 this august. Do you think its a good age?

amie, jackson just turned 3 in april. if he can do it then i think your will can do it too! i say go for it and see how he does. i talked with jackson the entire week before his first day. we toured the small gym they use so he'd know where his class would be. i showed him his gymnastics clothes and tried to get him excited about it. i think that did the trick - mentally preparing him, i mean. he walked in there the first day ready and didn't look back to me once!

That is so cute! I can't wait till Bella is old enough to do gymnastics and such!

How fun. I loved gymnastics when I was little. It should be a good way for him to expend some of his extra energy.