Trevor did it. He really really did it! He WON the Science Fair competition at his school! He took his project to school last Wednesday and on Thursday they announced that he took first place. That means that he beat out everyone at his school that entered the competition. 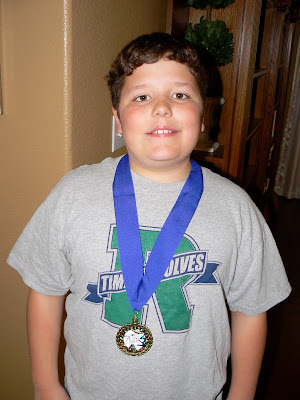 Wow. Trevor was feeling pretty good about himself that day. He was presented with this "gold" medal (2nd place got a silver and 3rd got a bronze - just like the olympics!) and wore it proudly all day and the next.

Trevor described how they announced the winners: it was during the morning announcements at school. These announcements are broadcast over the loudspeaker for the entire school to hear. First they announced 3rd place. Then second. At that point he had decided if he didn't win 2nd or 3rd that he wouldn't win at all. And then they announced 1st place. "First place goes to Trevor Ward!" He sat there stunned, in disbelief. All the kids around him gave him congratulations. His teacher said, "Good job, Trevor." Trevor said she looked like she was going to cry as she realized that all of the science fair winners were from her class. It was a proud moment for teacher and student. And then they went on with their day.

Trevor said kids were congratulating him all day long. He also said that he got tired of it after awhile. (But we all know that secretly he was loving all that attention!) He got a great boost of confidence that day.

Trevor, mom and dad are proud of you for doing your best. Congratulations on all your hard work!
Posted by jennifer at 9:04 AM